Throughout quarantine, I’ve been quietly feeling and figuring out changes to my skin. I knew that staying at home would have some physical repercussions, as the small spaces and lack of openness in New York just aren’t conducive for activity, but I didn’t know how it might manifest on my skin. Even if you’re dedicated to doing online workouts, I just don’t think they’re able to compensate for the absolute change in lifestyle and drop in overall activity level.

Now this paragraph is going to bring us closer, because we’re going into TMI territory. The first thing that I noticed after a few days is what I call a “sticky sweat.” This isn’t the good body-drenching sweat that leaves you feeling the kick of endorphins after a productive workout, we’re talking about sitting around feeling stuffy and finding the skin surface kind of… “moistened” (a word I hate but find to be the best fit), like there is a layer of film. I find this to leave the skin more vulnerable to breakouts and irritation at large. Scientifically, it’s probably due to the “moistened” surface giving rise for more bacteria to flourish which I imagine can’t be good for the skin barrier. The second thing I noticed was an increase in my skin’s oil production. I think with any added stress (my iPhone happened to conveniently die in the middle of this and it was nearly impossible to get a hold of Apple), and bad eating (I have been going to town on my baking projects which are more of an excuse to indulge in comfort foods like muffins and scones), on top of the “stuffiness” from lack of fresh, free-flowing air, there probably is an over production of sebum that can mix with the moistened surface, creating congestion and triggering breakouts, which to me pop up around my hairline and T-zone. Thirdly, it wasn’t a visible thing, but I just felt that my skin was very “meh” and it wasn’t until I read this post from YÜLI on microcirculation and lymphatic movement that I realized how much my skin really just needed to be “touched”.

These are the two skincare products I’ve been using to address and relieve the issues that my skin has encountered during quarantine: 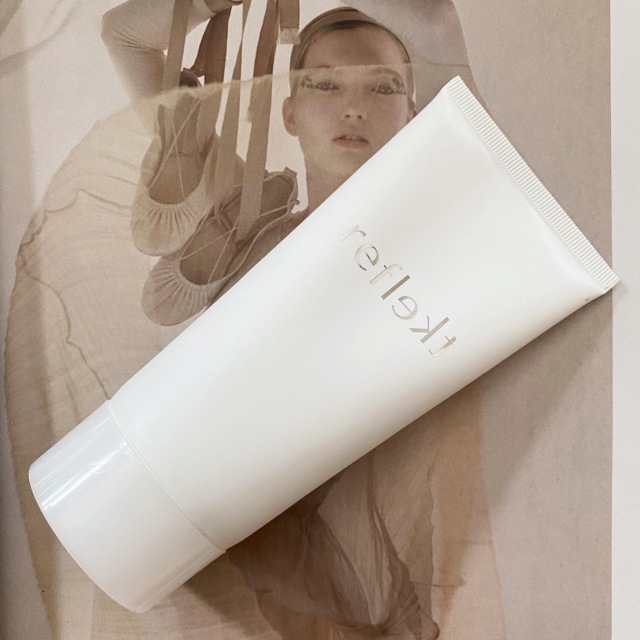 With the stuffiness, and heightened sebum production, washing my skin in the sink at night no longer felt like it was enough to “break through”. I moved it into the shower where the steam would help to dilate the pores, giving me a deeper cleanse. About 2 to 3 times a week, I’ll use Reflekt’s Daily Exfoliating Face Wash, a very gentle gel cleanser that doesn’t strip the skin (water, jojoba esters, and glycerin are its first 3 ingredients), nor does it even use acids to exfoliate (the only acids it does contain are hyaluronic acid and collagen amino acids). The exfoliation is provided by physical beads, the jojoba esters, a natural and very gentle physical exfoliator that is smaller, softer, and more uniform than any other physical exfoliator out there — natural or not — which is very important to me as I swore off physical exfoliators a while ago after seeing all the research on how even natural ones like Apricot Seeds can just as easily scratch and create micro-tears on the skin. This does not do that, the jojoba esters aren’t a hard solid, and would sooner collapse than damage your skin. What they do really well is they buff away the hardened oxidized sebum on the skin surface and those that have slipped into the pores, in addition to dead skin cells that stick to the surface now due to the excess sebum, which can cause breakouts.

Further, I like giving my skin a nice long massage with this cleanser, rolling the jojoba esters over my face as form of microcirculation to stimulate blood flow and restore some color to my face. I go over my skin in three sections: each cheek and forehead, massaging by barely applying any pressure to the surface of my skin and going counterclockwise. Not only does this keep the exfoliation very even, but it gets the blood circulating through the major areas, so everything feels fresher and more responsive afterward. I think this has become a great regular to rescue the skin. 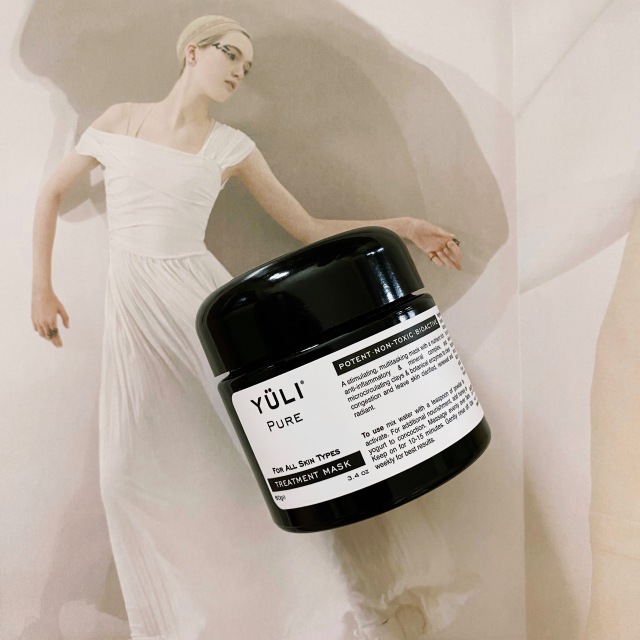 Because quarantine is a lifestyle change, you need that “intervention” that snaps your skin out of the stagnant funk. YÜLI’s mask is my treatment step, sought out weekly (or sometimes bi-weekly if needed) as a stand-alone hero to press the reset button when I just need a clean slate. Pure Mask happens to have the perfect formula that deals with everything skin is going through at this time. The clays are biologically active, so unlike many of the clay masks, these are rich in minerals and antioxidants, more helpfully, these active clays have an ionic charge that happens to be adapt at pulling out pollution buildup, and luring out the the hardened and oxidized sebum, and all the pore clogging impurities. There are also fruit derived enzymes and rice powder (a renowned beautifying ingredient recognized as central to Geisha skincare rituals used across the Tatcha line) that resurface dead skin cells and remove that film of buildup, while evening skin complexion. The two ingredients together also increase cell turnover, which is not only good for anti-aging but also timely to overturn the sluggishness and dead skin cell buildup. This mask helps to dissolve that film of grime, and excess sebum, and makes my skin feel like it can finally breathe again and that serums can actually penetrate.

And Pure Mask contains lymphatic herbs that work with the active clays to boost microcirculation and lymphatic drainage which are the two most helpful activations to handle the overall effects of stagnation on the skin. These processes help to give tissues new nutrients and the increased flow of blood brings in fresh oxygen, while moving out waste and buildup (goodbye sodium/sugar induced bloating and puffiness), and what this meant for me was seeing my skin come alive again with a noticeable rosy, fresh glow.

The Beauty Idealist is my beauty journal for beauty and skincare products, in particular luxury & green brands from the perspective of a New York girl who spends way too much time obsessing over all the products out there!

Got a question? Use the contact form or e-mail me: thebeautyidealist [AT] gmail.com

In some posts, I may use affiliate links that earn me small commissions on purchases made by you. Not only are my reviews not influenced by this (as these links can be directed toward most products out there), but your purchase from these links help me to keep this website going.